Brianna Andrade ’20 is salutatorian at Shea

A College Crusade college visit and tour helped Brianna Andrade, Class of 2020 salutatorian at Shea High School in Pawtucket, decide on her future.

“I didn’t even think beyond Rhode Island until I went on some college visits with the College Crusade. They gave me college experiences I could never have had otherwise,” she said. “Before we took the trip to Trinity and Yale, I didn’t even know Trinity was a thing, and now it’s my top school.”

She applied early decision to Trinity College in Hartford, Connecticut, and will study psychology there this fall. She has received several grants and scholarships – most recently a $2,500 renewable award from the MFG Scholars Program.

She wants to continue on to get her master’s in psychology – “maybe go even farther and then into clinical psychology. I don’t want to stop at my bachelor’s degree.”

She took a psychology class at Shea and credits her teacher, Michael Cookson, for lighting the fire to study psychology in college.

“I battled a lot between business and psychology [as a major],” she said. “I grew up around people who battled mental illnesses but couldn’t find help. I wanted to help people with that and help them with their daily problems.”

Born and raised in Pawtucket, where she lives with her parents, she’s the youngest in her family. “My mother mostly motivates me; she really risked it all coming from Cape Verde for a better life for her kids. She always told me I had to go to school and work hard, and she works hard every night as a CNA.”

And she’s still working hard, even though this was not the senior year anyone could have envisioned.

“I thought I was going to struggle [with distance learning] but I like the independent work I’m getting from my teachers. I’m able to be on top of my work and understand more that I would have in the classroom because I can dedicate more time to some subjects,” she said.

She said the abrupt end to her senior year has been difficult.

“I think I took it especially hard because I was class president for four years, so I was kind of the one planning senior activities like prom and graduation and then it all was taken out from under me. And especially because I worked since freshman year to fundraise for it,” she said, noting her class held school dances and bake sales, sold concessions at football games and more to raise funds.

Despite uncertainty about what the fall semester could hold – “I was thinking about that this week and I just really hope it goes to normal” – she’s ready for what comes next.

“I’m grateful for the overall exposure to college” the College Crusade has provided, she said. “It’s been able to open my eyes and prep me for college, even if just in little steps spread throughout the years.” 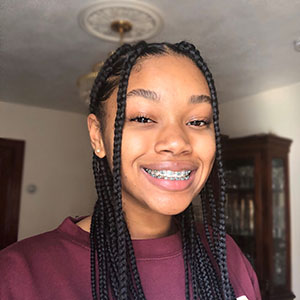